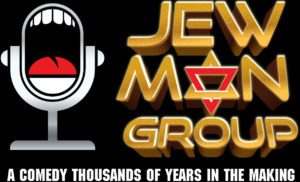 Sit back, relax and grab yourself a glass of Manischewitz wine for this light-hearted musical comedy that immediately transports audiences back to the days when the Catskill Mountain Comics ruled the land.

From Don Rickles, Jerry Lewis, and Mel Brooks to Billy Crystal, Adam Sandler, and Jerry Seinfeld the time is right for the very best musical tribute and comical parody, celebrating the brilliance and charm of these comedians.

It’s as timeless as a “shaken not stirred” martini, a tuxedo dressed to the nines or a diamond ring.

No white tigers, no pyrotechnics, no triple jointed French Canadians – just raw talent and a camaraderie that gives the audience a sense that they have been given a rare opportunity to peek in on a great party.

So sit back relax, grab a cocktail and enjoy 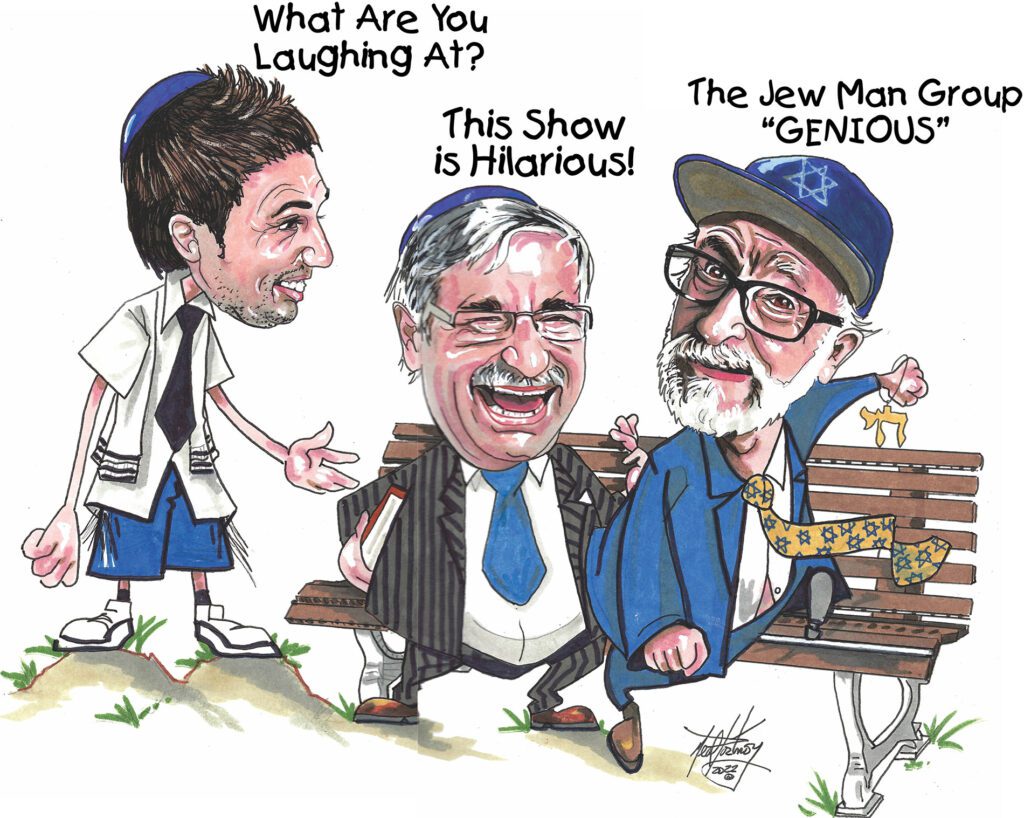 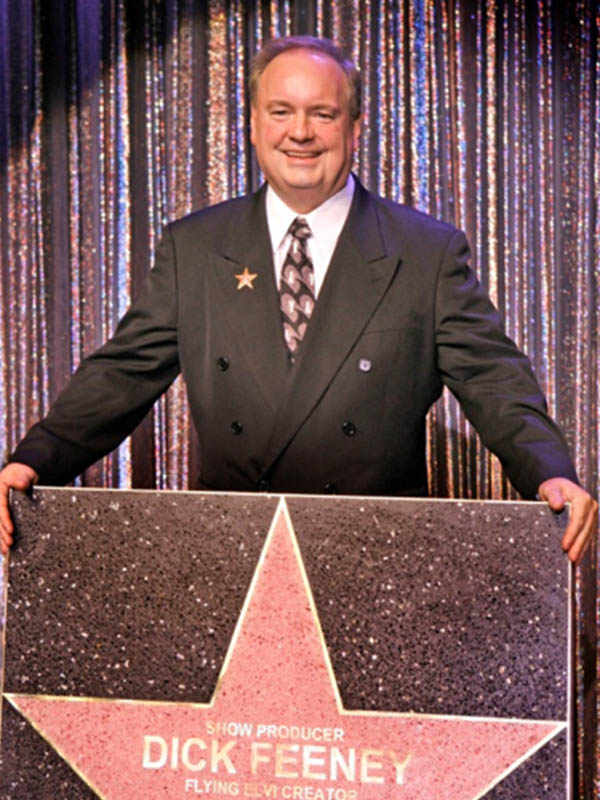 Dick Feeney, Producer/Writer of the “Jew Man Group,” show is no stranger to Vegas action. Known by some as a “marketing producer,” if there’s one thing Feeney knows it’s how to sell a show in the Las Vegas, the “Entertainment Capital of the World.”

Dick Feeney grew up in the Boston area, in Rockland, Massachusetts. After years of touring with the highly popular Boston based band the “Lewis & Clark Expedition” Feeney formed his own group “Gemini” and continued developing the talent and skills to make him one of the countries top nightclub entertainers. Producing his first critically acclaimed show in 1981 “Lullaby of Swing” in Honolulu, Hawaii he then toured the production for successful runs in both Atlantic City at the Tropicana and Boston at the Bradford Theatre.

Feeney first came to Las Vegas in 1985 as Associate Producer of “An Evening at La Cage” at the Riviera Hotel & Casino. and in 1987 Produced “Crazy Girls”

In 1991 Feeney opened “Viva Las Vegas” at the Sands Hotel & Casino. Viva Las Vegas’ run of over 18 years makes it the longest running and most successful afternoon show in Las Vegas history.

In March of 2016 Feeney teamed up with “Rock & Roll Hall of Fame” legend Bill Medley to bring the Righteous Brothers to Harrahs in Las Vegas for a long term residency.

In all his shows have totaled over 38,000 performances.

An avid traveler himself, Feeney’s even taken his productions to the sky, as owner of The Flying Elvi skydiving team. The Flying Elvi, who were first featured in the movie “Honeymoon in Vegas,” consists of ten Elvis Presley clad jumpers who skydive into events around the world from altitudes of 5,000 – 12,000 feet, free falling at speeds up to 160 miles an hour. The act combines a spine-tingling aerial skydiving performance of smoke trails, pyrotechnic fireworks and precision maneuvers with an over-the-top entertaining stage show and has entertained audiences across the country for over a decade.

With shows currently running in Las Vegas plus touring productions, the Flying Elvi darting about the heavens, a home in Las Vegas, Hawaii and Utah, a wife Melissa and four children plus a one year old grandson, Feeney may seem busy but loves it all.

In October of 2008 Feeney was awarded a star on the prestigious “Las Vegas Walk of Stars” for his outstanding contributions to the Las Vegas community. The star is permanently on display in the sidewalk in front of the Paris Hotel and Casino. In May of 2009 he was unanimously selected for induction into the Rockland High School Academic Hall of Fame. 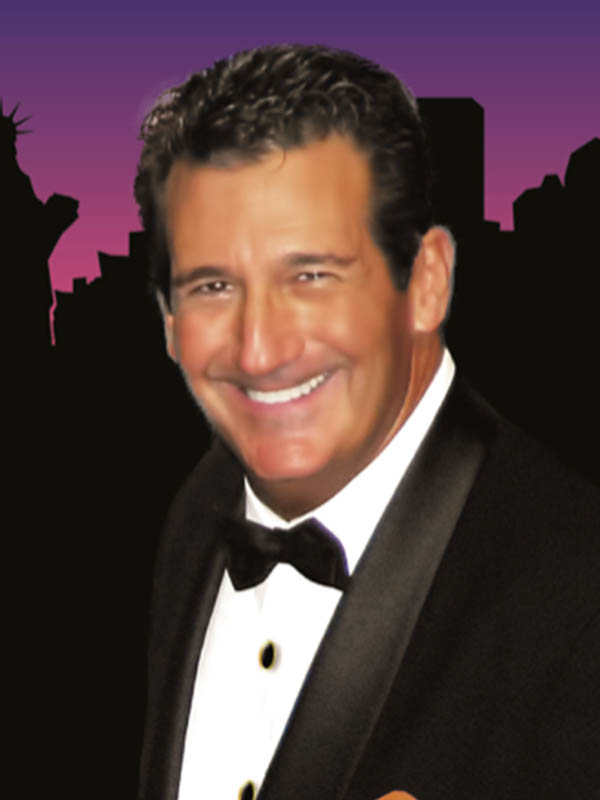 Co-Producer/Writer of the new show “Jew Man Group” at the Tuscany Hotel and Casino, Rick Michel has been a master impressionist for more than 50 years. His show “Sinatra Forever” tours nationally as well as internationally with performances in Canada, Italy, Mexico, Brazil and Chile. More than half the members of his orchestra are musicians that actually played with Frank Sinatra. This swinging orchestra backs Michel in his 22-song set that covers everything from classics such as “Witchcraft” and “Fly Me to the Moon” to even lesser known hits such as “I’ve Never Been in Love Before” from the musical “Guys and Dolls.”

In addition, he stars in his one-man show, “Man of 1000 Voices”, where he performs over 40 impressions in each show. With visual backgrounds of the people he is doing this is a show not to miss.

For Michel, a memorable highlight came when he performed his impression of Bob Hope for the comedic icon himself at the Bob Hope Celebrity Golf Classic in Palm Springs. He also made appearances in an episode of “Baywatch” playing a schizophrenic killer, and on “Entertainment Tonight,” “America’s Funniest People” and the “Larry King Show.”

Michel also shared the spotlight with Rich Little playing Bob Hope to Little’s Bing Crosby and Jerry Lewis to his Dean Martin. Little called Michel “one of the best impressionists around today.”

Michel has shared the stage with many celebrities including Rich Little, Mickey Rooney, John Byner and Sherman Hemsley. He has opened for comics such as Bobby Collins, John Pinette, Rita Rudner and George Wallace, and performed impersonations for such luminaries as Frank Sinatra, President Gerald Ford, Tony Curtis and Steve Allen.